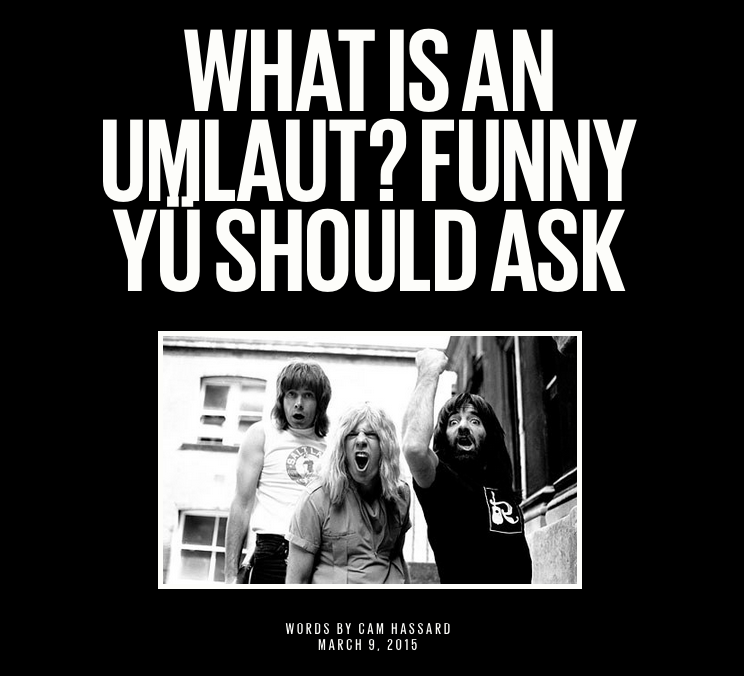 It stares back at you, smoking its foreign cigarettes, corrupting your vowels like some prostrate Eurotrash colon. Metal bands embrace it for its Teutonic zest; ice cream companies exploit its Nordic finesse.

The umlaut is not your average alphabetical diacritic.

Up there with circumspexes, cedillas and breves, umlauts are treated with jocular xenophobia by the English-speaking world, the fruity exchange students lurking in the back row that nobody understands, or cares enough to.

Aside from the odd creeping döppelganger or sprinkle of modish zest atop our local Zoës and Chloës (though technically these are ‘diaereses’…but we’ll get to that later), the mischievous dotted layabouts are an uncommon presence in day-to-day English. In Europe the umlaut is a cherished native—folks in Switzerland, Germany, Sweden, Finland and even Turkey consider it as much a part of their crew as ‘u’ or ‘i’.

As a cherished element of their language, the Germans, as I’ve come to realise, are particularly fond of a good umlaut—after 12 months living in Berlin, my Deutsch may be no better than what I came in with, but the umlaut has become a best pal. Watching its shady, unblinking eyes as it chain smoked down the tenebrous streets of my kiez, I decided to stare back. I held its hand, brought it into light, embraced it. We share müsli now each morning over frühstück; evenings over dinner with lugs of olivenöl.

All it really wanted was to be understood.

It may come as some surprise even to many Germans that their prized umlaut was in fact invented by one of the Brothers Grimm—budding linguists as well as arbiters of über-violent fairy tales. In 1819, Jakob Grimm detected a vowel mutation in his native tongue; he called it ‘umlaut’ (meaning literally ‘around sound’), a process where ‘ai, oi and ui’ mutated into ‘ä, ö, and ü’ (also written as ae, oe, and ue).

Some got off on the umlaut even more than the Brothers Grimm did. German priest, Johann Martin Schleyer grew such an irrational appetite for the umlaut that he devised an entire language based around it. In 1879, a Divine presence allegedly encouraged him to create ‘Volapük’, an easy to learn, universal language based on European linguistic roots. It was the first invented language to gain widespread success—200 Volapük societies and clubs and 25 Volapük journals sprung up internationally by the 1880s. The third Volapük convention, held in Paris in 1893, was undertaken entirely in the nascent tongue. The umlaut was revered—‘love’ became löf; ‘potato’, pötet. But the glory didn’t last; in-fighting led Volapükists to spawn splinter languages, while others fled to Esperanto.

Today, Volapük remains a forgotten memory. But not the umlaut. In its native land, it became a linguistic institution. On the other side of the globe it kept on keepin’ on like a couple of rolling stones, hitching an unexpected foray into the world of rock n roll.

Since the late 1960s, umlauts (or ‘rock dots) have become a formative addition to logos of the world’s most seminal heavy metal bands. The phenomenon can be traced back to pioneers, Blue Öyster Cult, who arguably did even more for the umlaut than they did for the cowbell.

Attracted to the umlaut’s gothic, Wagnerian overtones and allusions of leather-clad peril, countless bands followed suit. Mötorhead’s Lemmy thought it “looked mean”; Queensrÿche and Mötley Crüe concurred; Hüsker Dü went for a deuce. Today, Röyksopp and Maxïmo Park are devotees; the members of US outfit Mudvayne are Chüd, Güüg, R-üD and Spüg; and locally, Melbourne outfit Barbariön would be nothing without a hefty ‘laut to keep their metal warship sailing.

Someone clearly didn’t let these hard rock doyens in on the fact that the umlaut was designed to soften and finesse, rather than harden. Of course, it’s all for show—there has never been linguistic justification for a metal umlaut, a truth demonstrated each year when German crowds bellow for “Moetley Croeh!” and “Moeterhead!” on their respective arena tours of Deutschland. Spoof metal heads, Spinal Tap delivered the ultimate parodist statement on this, their logo umlaut hovering stubbornly above the letter ‘N’.

It’s when we shift to the marketing arena of ‘foreign branding’ that we begin to see the subtler qualities of the umlaut at work.

Ice cream chain, Häagen Dazs succeeded in communicating the essence of Danish authenticity and tradition with its sexy, eye-catching ‘ä’—this, despite the fact it’s a made up name created by a businessman from the Bronx.

Sometimes the umlaut can backfire too. In 2005, the British Advertising Standards Bureau forced now defunct kitchen manufacturer, Möben, to remove the umlaut from all advertising and showroom signage, charged with trying to pass off a ‘German level’ of craftsmanship when it actually hailed from Manchester.

It’s a fine line between snappy insignia and false advertising, yet others have managed to tread it. British design company Üutensil is doing a roaring trade on their Swedish-inferred home goods; dessert brand Gü (formerly unfortunately titled brand, ‘Goût’) are treading the similar Häagen Dazs approach; while US-brewed Böner beer is simply havin’ a laff. Nothing grammatically perfunctory here—like rock n roll, the world of marketing has always been about looks over linguistics.

Interestingly, while double dots are being pimped out by non-Euro businesses, German and Scandinavian companies are ditching theirs. According to beer barons, Löwenbrau and taxi-sharing service, Uber, umlauts tend not to translate in a strongly English, Internet-driven marketplace. Avoiding confusion, Jägermeister recently rebranded itself in China as “Ye Ge” (aka ‘wild guy’).

It can be rather tricky, after all, for those outside Europe to locate the umlaut button on a keyboard—a predicament that can just as easily do a number on one’s personal identity. After immigrating to New Zealand years back, the Künzi family of Switzerland were forced to change their names when their rogue ‘ü’ effectively blew up the computers at the Department of Internal Affairs; no room at the kiwi inn for rascally double dots.

Yet the umlaut isn’t alone in its mischief. You might have noticed the presence of slightly incongruous dots above select vowels in the New Yorker. As the New Yorker explains, these are not umlauts, but ‘diaeresis’, the umlaut’s identical, yet functionally and rather old-fashioned twin. While the umlaut goes over the first vowel in a word (and alters it), a diaeresis goes over the second consecutive vowel to indicate a separate syllable—like ‘coördinate’, or ‘naïve’.

While the umlaut’s linguistic purposes are justified, the diaeresis is more ambiguous. It’s an archaic choice, the New Yorker essentially alone in using it (everyone else just fine with a hyphen, or nothing at all). Don’t confuse the two; umlaut is the Simon to dieresis’s Garfunkel—one is a rock star still touring arenas, the other struggles to get a gig.

Part rock pig, part marketing hero, part linguistic convention, whether we think those sultry dots straddling our vowels are the horns of Satan or sweet, angelic halos, it is clear, regardless of where we are in the world—English native or not—that the umlaut is not going the way of the diaeresis anytime soon; and nor would we want it to.

My Deutsch comprehension stagnates daily here in Berlin, it seems my true love of the Germanic language may never transpire, but one little part of it can and almost certainly will suffice. I’ve got a fever, and the only prescription is more umlaut.